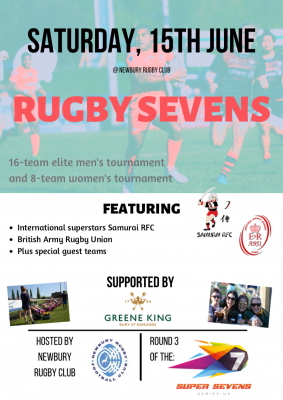 Newbury Rugby Club is proud to be hosting the third round of the Super Seven Series on the 15th June 2019.

In addition to a full rugby schedule there will be live music, vendor stalls, and a barbeque running throughout the day and the Rugby Club’s bar will be open.

Local singer Emma Lawrence will also be performing with her band Fully Funked.

There will be a £5 parking charge on the day.

We attended nephews wedding reception there and thoroughly enjoyed it. ideal location.

We have been coming here for conferencing for many years and the staff are always brilliant.

All Rights Reserved. © 2020 The Venue at Newbury Rugby Club. Website by